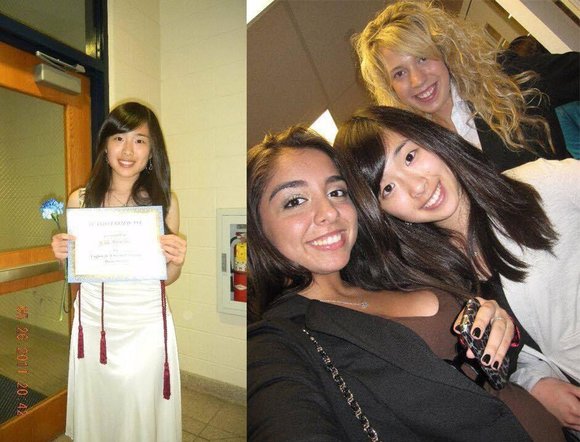 “I have nurtured a liberal and positive attitude toward life and enhanced my ability to tackle challenging obstacles. Studying abroad is definitely the best experience I have ever had,” Annie said with a smile. Annie Yi-Wei Liu lived in the United States for the entirety of her high school life career. She learned and obtained numerous precious experiences as an east coast girl in New Jersey. Even though she now lives in Taiwan, the lessons she learned, both in school and in life, are still deep within her and remind her to be diligent, persevering, and humble every minute.

Annie moved to Paramus, a small town in New Jersey, after her second year in middle school because of her father’s work. “To be honest, it wasn’t easy for me for the first few months when I first moved to a foreign country,” Annie admitted. “Excuse me. Do you know where the bathroom is?” Such a normal, everyday question was difficult for her to answer or give any response to as English was a completely foreign language to her. She was scared and frightened of the new environment and unfamiliar faces.
Before moving to America, her English skills were only average and she had never been to bilingual school. The first few months at Paramus High School were terrible, she recalls. She didn’t know what to say when teachers called on her in classes because she just couldn’t express herself in complete sentences. “I always lowered my head and felt extremely uncomfortable when the teacher was looking for volunteers,” Annie admitted. If the teacher did call on her, the tremor in her voice would be too much for her to articulate her ideas clearly.

Fortunately, the teachers were very understanding and were willing to spend extra time after school tutoring her. She was really lucky because all of her teachers were willing to help her; none of them gave her a hard time. She was especially thankful for her science teacher Mrs. Kondratowicz. She recalls that Mrs. Kondratowicz allowed her to skip all the open-ended questions on quizzes and tests because she knew that a second language learner would not be able to understand questions related to scientific terms. “I wouldn’t have passed the class if it hadn’t been for her, and even after all these years I continue to write emails to her,” she said. The kind teacher even stayed after school and explained all of the questions on the test to help Annie to catch up.

Because she didn’t know how to talk or socialize in another language at all, making friends was not easy. “Going to school was a nightmare to me; I had no one to sit with during lunch, and no one to run with during gym,” she confessed. Eventually, Annie made some friends who were willing to communicate through body language and had a lot of patience as it took her a long time to express herself. The classmates who were native speakers took Annie around and spent a lot of time  teaching her English by talking to her or texting her. “It was so helpful because it was not like learning English from a textbook, but actually using the language every single second,” Annie said. Her friends would correct her grammar if she made any errors, and they taught her English and even shared cultures with her. “I remember going to one of my white friends Krista’s house and realizing that no one was taking off their shoes before they walked into the house. My friend’s mom was puzzled when she saw me untying my shoelaces.” While she was explaining why she wanted to walk into their house with bare feet, she realized that it was a cultural difference that they were encountering, which she had only previously read about in textbooks or saw in American movies back in her hometown. “I was so amazed by the fact that although we are all human beings, the various cultures and backgrounds have influenced every one of us in so many possible ways and it was totally fascinating to be part of a cultural exchange experience in real life.”

Her English skills improved day by day as time flew by. She met some great friends that she really cherishes as well. “The best encouragement was probably that I got accepted into National Honor Society and World Language Honor Society,” Annie enthused. “Even though that might be something trivial for other people, it was very important and exciting to me.” She almost cried at the ceremony when she was on stage, and all she wanted to do was to yell “I did it!” to her mom, friends, family, and the world.
​
​Not knowing what to expect, Annie flew to New Jersey from Taiwan with her family, and she faced difficulties learning a second language. But along the way, she made many wonderful friends and experienced things that she never thought possible. “I’m very glad and thankful that I had the opportunity to go abroad for further studies. Although my English still isn’t perfect, I have made progress through this journey,” Annie concluded.
​
Order Now